For cosmetic products, the focus is on crucial requirements regarding their stability, effectiveness and harmlessness. Microbiological stability plays an essential role here, especially when it comes to consumer safety. If e.g. an inadequately preserved product contains enough water and nutrients to sustain microorganisms, these can then proliferate accordingly. This happens particularly easily in a warm and sometimes damp bathroom environment, where most cosmetics are in fact used and stored. In order to ensure product quality and consumer safety, cosmetics should be allowed to become contaminated through microbial growth neither unopened nor when recently reopened.

Experience has shown that the origins of microbiological contamination in cosmetic products can be traced back to two sources. Firstly, cosmetics may become microbially contaminated during the manufacturing and filling process. However, cosmetic products are usually free of microorganisms while unopened. The quality of the raw materials, operational hygiene and regular microbiological controls usually ensure that cosmetics do not come with pre-contamination. The second possible source of microbiological contamination is the consumer himself or herself. In the period between the opening of a package and the complete consumption of a product, microbiological contamination is repeatedly introduced, e.g. from the consumer’s own hands. Cosmetics in jars are particularly susceptible to this. To prevent contamination of the product nevertheless, a wide range of preservatives are added during manufacture. Here the gentlest and most natural form of antimicrobial protection is offered by natural multifunctionals. In addition to their active functions, these also provide very good antimicrobial protection.

When assessing the safety of cosmetic products, cosmetics legislation requires a microbial challenge test (alt. Preservative Efficacy Test – PET) to be carried out to ensure sufficiently effective preservation. There are various recognised methods for this, which can differ with respect to the microorganisms used, the amounts inoculated in the samples, and the acceptance criteria.

One of the best-known methods comes from the field of pharmacy and is listed in the European Pharmacopoeia (Eu. Ph.) 5.1.3., described under ”Test for efficacy of antimicrobial preservation”. This method is designed first and foremost for checking the microbiological stability of non-sterile pharmaceutical products, but can be used for cosmetic products as well.

In April 2012, the first version of the ISO 11930 standard “Cosmetics — Microbiology — Evaluation of the antimicrobial protection of a cosmetic product” was published, which is specially tailored to cosmetics. The challenge test according to ISO 11930 is now widely used and recognised as a standard test for checking the microbiological stability of a cosmetic product.

Although both methods are recognised and similar with regard to many test parameters, they differ in some points. Both challenge test methods include the same test organisms. These comprise three bacterial species, two of which are gram-negative and one gram-positive, as well as one yeast and one mould.

The inoculation method is identical for the three bacteria with both methods, but differs for the yeasts and moulds. The challenge test according to Ph. Eu. 5.1.3. provides for the same level of inoculation between 100,000 and 1,000,000 viable cells for all 5 microorganisms per gram of sample. However, the challenge test according to ISO 11930 describes a slightly lower inoculation of yeast and mould of between 10,000 and 100,000 viable cells per gram of sample.

DIFFERENCES BETWEEN THE METHODS PRESENTED 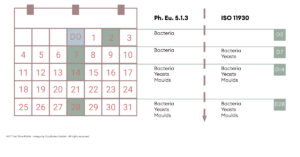 In general, there are two assessment levels for an challenge test, namely A and B. These are based on the log level reduction in viable cell count compared to the start of the test. If the test does not meet the criteria for either level A or level B, the test is rated as failed. While according to Ph. Eu. 5.1.3. the bacteria are assessed already on day 2, according to ISO 11930 this is not done before day 7. However, the criteria for assessment are then comparable from day 7 onwards.
With an challenge test according to ISO 11930, the yeasts are assessed already from day 7. In order to achieve an A rating, however, they have to be reduced by one log level less in the comparison. The moulds are assessed from day 14 with both methods. However, the same applies to the assessed as in case of the yeasts. Reduction by one log level less is sufficient for an A rating.

Comparing the cosmetics challenge test according to ISO standard 11930 with the specifications of the European Pharmacopoeia, the latter provides for a somewhat stricter assessment of the microbial reduction through the inclusion of an additional test time point for the bacteria. In addition, the European Pharmacopoeia specifies higher reduction in terms of log levels with a likewise higher inoculation quantity for the fungal species. This may be necessary for pharmaceutical products, but for cosmetic products the test time points, inoculation levels and acceptance criteria described in ISO 11930 are sufficient. In addition, the challenge test of ISO standard 11930 takes into account a measurement uncertainty with regard to microbiological fluctuation ranges of up to 0.5 log levels. The challenge test of ISO standard 11930 has proven an appropriate alternative to the European pharmacopoeia since its publication in 2012.

Cosphatec offers performance of challenge tests according to both ISO 11930 and Ph. Eu. 5.1.3. The test selection will depend on individual factors. Depending on the customer’s wish, one method is selected and the preservation system with our Multifunctionals adapted and optimised accordingly.